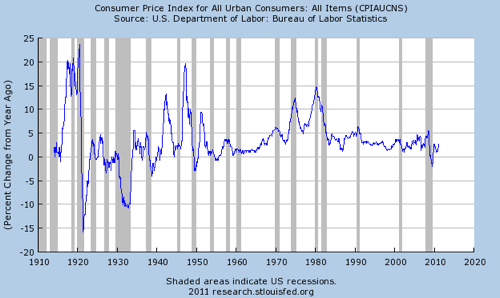 But if we were targeting a 2% inflation rate--which we are not--should we be targeting a higher rate? I believe that the answer is yes.

To explain why, let me take a detour back to the early nineteenth century and to the first generations of economists--people like John Stuart Mill who were the very first to study in the industrial business cycle in the context of the 1825 crash of the British canal boom and the subsequent recession. John Stuart Mill noted the cause of slack capacity, excess inventories, and high unemployment: in the aftermath of the crash, households and businesses wished to materially increase their holdings of safe and liquid financial assets. The flip side of their plans to do so--their excess demand for safe and liquid financial assets--was a shortage of demand for currently-produced goods and services. And the consequence was high unemployment, excess capacity, and recession,.

All this is Monetarism 101. Or perhaps it is just Monetarism 1. We reach Advanced Macroeconomics when the short-term nominal interest rate hits zero. When it does, the government cannot inject extra safe and liquid money into the economy through standard open-market operations: a three-month Treasury bond and cash are both zero-yield government liabilities, and buying one for the other has no effect on the economy-wide stock of safety and liquidity. When the short-term nominal interest rate hits zero, the government has done all it can through conventional monetary policy to fix the cause of the recession. The economy is then in a "liquidity trap."

Now this is not to say that the government is powerless. It can buy risky and long-term loans for cash, it can guarantee private-sector liabilities. But doing so takes risk onto the government's books that does not properly belong there. Fiscal policy, too, has possibilities but also dangers.

How can you minimize the chances that an economy gets caught at the zero nominal bound where short-term Treasury bonds and cash are perfect substitutes and conventional open-market operations have no effects? The obvious answer is to have a little bit of inflation in the system: not enough to derange the price mechanism, but enough to elevate nominal interest rates in normal times, so that monetary policy has plenty of elbow room to take the steps it needs to take to create macroeconomic stability when recession threatens. We want "creeping inflation."

How much creeping inflation do we want? We used to think that about 2% per year was enough. But in the past generation major economies have twice gotten themselves stranded on the rocks of the zero nominal bound while pursuing 2% per year inflation targets. First Japan in the 1990s, and now the United States today, have found themselves on the lee shore in the hurricane.

That strongly suggests to me that a 2% per year inflation target is too low. Two macroeconomic disasters in two decades is too many.