Grasping Reality by Brad DeLong
Archives Highlighted Previous Edit COVID Market for Man Slavery 20th C. Reading 'Chicago'
We Really Would Be Much Better Off without the Republican Party
What Has the Health Care Inflation Rate Been?

Yes, Present-Value Calculations Are Useful: Yes, the High-End Tax Cuts Are as Painful to the Government as the Social-Security Shortfall 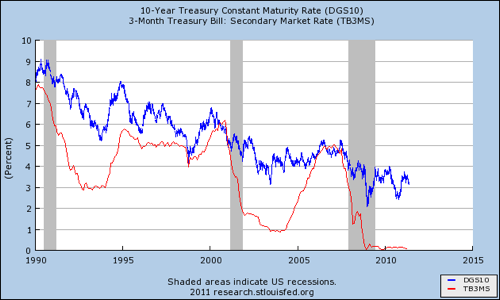 I see from Paul Van de Water thatMegan McArdle continues her ill-advised and erroneous war against present-value calculations and the CBPP...

We Cannot Pay For Social Security By Ending the Bush Tax Cuts on High Earners : [CBPP] makes it seem as if we could, by simply refusing to extend the Bush tax cuts on high earners, cover virtually all of the [future] Social Security shortfall.... But this is not the case. The CBPP gets its figure by taking present values of the Bush upper income tax cuts extended over 75 years, and comparing them to the present value of the Social Security shortfall.... [P]resent value has some drawbacks.... Because it discounts future dollars, often quite heavily, cash flows which happen beyond 10-20 years out virtually disappear.... [T]wenty years out, [today's] $100 is only worth $35 a year to you....

[T]he government does not borrow and save like normal people--its constraints are different.  The closest it can come to saving is to pay off debt.  And our debt is not yielding 5.25% right now; our highest-yielding debt is paying 4.375%, which the government is trying to sell more of, not pay off, in order to lengthen the average time-to-maturity of the debt held by the public, which lowers the risks to the Treasury of a sudden interest rate spike. The average interest rate on debt held by the public is around 3% right now; it hasn't been as high as 3.75% since April 2009...

That last paragraph seems to me both wrong and irrelevant. First, the government does borrow and save at the margin: it does issue and repay debt. That's what borrowing and saving is: you issue and you repay debt (and accumulate assets). The government acts exactly like "normal people."

Second, it is very unlikely that the average interest rate on debt held by the public will stay at 3%--we are, after all, a deeply depressed economy. It is bizarre to forecast that we will always have a deeply depressed economy. And if we do--if the economy stays so weak that the government can borrow at 3% forever--covering the Social Security shortfall will be a very minor problem.

Moreover, I would argue that the appropriate discount rate for the government is higher than the average interest rate it pays on debt.

If the government pays back debt in normal--non-depression--times, two things happen: (i) the government owes less interest, (ii) lower government borrowing crowds-in private investment and speeds economic growth, which means that the government collects more in taxes. How much more in taxes? In a full-employment model with full crowding-in, with a 5.25% government interest rate, with a 5% private return on investment boosted by half again as much in higher wages and by another half again as much in technological and organizational externalities, and with a 30% tax share, we get that a $1 of debt repayment reduces interest payments by $0.0525/year and boosts tax revenues by $0.03/year--which would mean that an 8% discount rate would be appropriate, for government "investments" in debt repayment thus carry an 8% return in terms of government cash flow.

A social-welfare based calculation would produce even higher discount factors--the benefit of ending the high-income marginal rate reductions now is not just a healthier government financial picture but a bigger private-sector economic pie, and that is worth a lot--that should go into the benefits of ending the high-income marginal tax-rate reductions as well.

Of course, all this--tax hikes, benefit cuts, etc.--needs to wait until the economy is back near full employment. At the moment, with the economy deeply depressed, we need all the tax cuts and all the spending increases now that we can get.

Thus Megan McArdle seems, to me, to be completely wrong when she says that present-value calculations are inappropriate for the government because it "does not borrow and save like normal people" and hence faces unusual liquidity constraints. It does not. It borrows and invests like everybody else. And present-value calculations--with the right discount rate--are the perfect tool to use to analyze its borrowing and investing.

One last point: the claim that there is something wrong with present-value calculations because "cash flows which happen beyond 10-20 years out virtually disappear"? That is completely wrong. What present-value is telling us is that in a productive economy with high-return investment options what we do now matters a great deal because the profits (and losses) from what we do now have a long time to compound. That's an important and valid insight. That's not a flaw.

Yes, Present-Value Calculations Are Useful: Yes, the High-End Tax Cuts Are as Painful to the Government as the Social-Security Shortfall

I see from Paul Van de Water thatMegan McArdle continues her ill-advised and erroneous war against present-value calculations and the CBPP...