Grasping Reality by Brad DeLong
Archives Highlighted Previous Edit COVID Market for Man Slavery 20th C. Reading 'Chicago'
ATT Service in Berkeley Worse than I Would Have Believed Possible Even Knowing That It Was Worse than I Believed Possible,,,
Larry Summers Admonishes Glenn Hubbard for Making Up Budget Fantasies 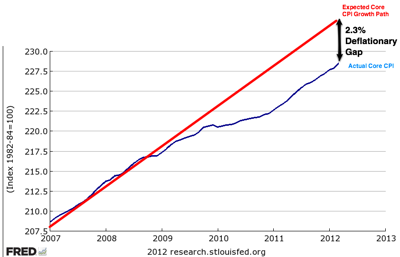 There's this view circulating that the views I expressed about 15 years ago on the Bank of Japan are somehow inconsistent with our current policies. That is absolutely incorrect. My views and our policies today are completely consistent with the views that I held at that time. I made two points at that time to the Bank of Japan. The first was that I believe that a determined central bank could and should work to eliminate deflation….

The second point that I made was that when short-term interest rates hit zero, the tools of a central bank are not exhausted…. [W]e are not in deflation…. We have an inflation rate that's close to our objective…. [D]oes it make sense to actively seek a higher inflation rate in order to achieve a slightly increased pace of reduction in the unemployment rate? The view of the committee is that that would be very reckless…. To risk that asset [of our credibility] for what I think would be quite tentative, and perhaps doubtful, gains on the real side would be an unwise thing to do.

[M]macroeconomic policy has played, and will continue to play, a major role in Japan's macroeconomic (mis)fortune…. [T]here is much that the Bank of Japan, in cooperation with other government agencies, could do…. [BOJ] responses, when not confused or inconsistent, have generally relied on various technical or legal objections--objections that, in my opinion, could be overcome if the will to do so existed….

[Si]nce 1991 inflation has exceeded 1% only twice... the slow or even negative rate of price increase points strongly to a diagnosis of aggregate demand deficiency…. [C]ountries that currently target inflation… have tended to set their goals for inflation in the 2-3% range, with the floor of the range as important a constraint as the ceiling….

[N]ote that today’s real interest rate may not be a sufficient statistic for the cumulative effects of tight monetary policy…. [O]ne might want to consider indicators other than the current real interest rate--for example, the cumulative gap between the actual and the [previously] expected price level--in assessing the effects of monetary policy….

[D]efenders of Japanese monetary policy make… is as follows: “Perhaps past monetary policy is to some extent responsible for the current state of affairs. Perhaps additional stimulus to aggregate demand would be desirable at this time. Unfortunately, further monetary stimulus is no longer feasible…. "

It is true that current monetary conditions in Japan limit the effectiveness of standard open-market operations. However… liquidity trap or no, monetary policy retains considerable power to expand nominal aggregate demand….

Second, that increased nominal spending and rising prices will lead to increases in real economic activity. The second of these propositions is empirical but seems to me overwhelmingly plausible.... The first... in my view one can make what amounts to an arbitrage argument--the most convincing type of argument in an economic context--that it must be true.

The general argument that the monetary authorities can increase aggregate demand and prices, even if the nominal interest rate is zero, is as follows: Money, unlike other forms of government debt, pays zero interest and has infinite maturity. The monetary authorities can issue as much money as they like. Hence, if the price level were truly independent of money issuance, then the monetary authorities could use the money they create to acquire indefinite quantities of goods and assets. This is manifestly impossible in equilibrium. Therefore money issuance must ultimately raise the price level, even if nominal interest rates are bounded at zero. This is an elementary argument, but, as we will see, it is quite corrosive of claims of monetary impotence…

That is not where Bernanke was yesterday, in spite of his claims that he had not altered his intellectual positions.

There's this view circulating that the views I expressed about 15 years ago on the Bank of Japan are somehow inconsistent with our current policies. That is absolutely incorrect. My views and our policies today are completely consistent with the views that I held at that time. I made two points at that time to the Bank of Japan. The first was that I believe that a determined central bank could and should work to eliminate deflation….