Grasping Reality by Brad DeLong
Archives Highlighted Previous Edit COVID Market for Man Slavery 20th C. Reading 'Chicago'
This Time It Is Not Different: Walter Bagehot and the Persistent Concerns of Financial Macroeconomics
Are Wingnuts Crazier than They Used to Be? No. But Now They Are All Concentrated in One Party

End Double Mandate to Save Fed’s Independence: As justices have weighed in on questions that were traditionally the province of elected officials -- such as abortion rights -- political institutions have fought back by making ideological orthodoxy a requirement for a Supreme Court appointment. What’s worse is that a similar dynamic is now occurring at… the Federal Reserve Board….

It is common to blame conservatives for this gridlock. That amounts to confusing cause and effect. The truth is that the visceral anti-Fed position of many Republicans is simply a political reaction to the interventionism of the central bank, which in the last decade has overstepped its boundaries…. The protracted low interest-rate policy [that started in 2001-2003] is a tax on savers that wasn’t voted by Congress… 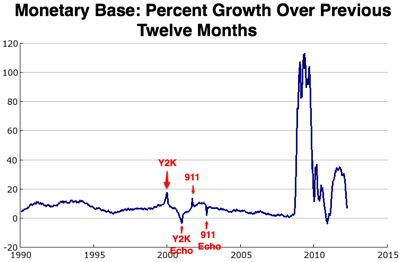 But the Federal Reserve did not do anything over 2001-2003. It did not expand its balance sheet, increasing its supply of liquid liabilities that investors could hold as assets, and thus lower the market equilibrium return paid to savers. The market did that.

It is true that the Federal Reserve did not intervene in the market to peg the return to saving at a value that Luigi Zingales thinks is just. (Had it done so, it would in all likelihood have sent the economy into a recession in 2004.) But a failure of a government to intervene in a market and peg a market price at a level that some pressure group thinks it deserves is not a "tax".

The “put options” offered to Bear Stearns Cos… were subsidies…

But Bear Stearns was not offered a put option. Bear Stearns was forced into liquidation over a weekend at a price of $2/share (then raised to $10/share). The market the previous Friday had guessed that it would be taken over at a price of $60/share. You can't call a Federal Reserve intervention that leaves a bank's shareholders $50/share poorer than they had thought they were the previous Friday a "subsidy'.

The “put options” offered to… Citigroup Inc. were subsidies… never approved by the political process… 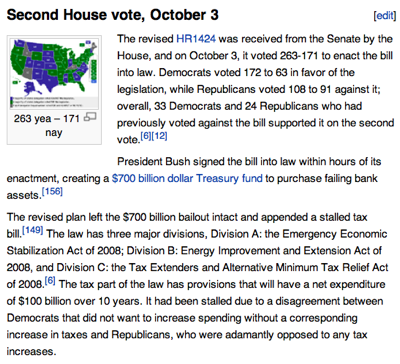 But it was approved by the political process.

That was the whole point of the TARP debates and votes in the fall of 2008--that the lender-of-last-resort activities being undertaken at the end of the George W. Bush administration have the explicit backing of Congress and the President, rather than just being done on the Federal Reserve's say-so.

And when Zingales claims:

all these interventions were well intentioned and some were beneficial…. But so are many of the Chinese leaders’ decisions; that doesn’t make them legitimate in a democratic system…

The simple fact is that the Federal Reserve is and has been trying as best it can to do its job of maintaining a steady flow of aggregate demand to create a stable economic environment so that workers, savers, investors, and entrepreneurs can make good economic decisions without, as John Maynard Keynes said, "the odds loaded against [them]… furnished with many zeros, so that the players as a whole will lose…" The simple fact is that Republican politicians appear not to like the Federal Reserve to do its job right now: they appear to want it to deviate from technocratically-appropriate policies in order to further shrink aggregate demand and raise unemployment--to put the economy further in the tank, in the hope that that will win them more seats in November 2012.

Maybe those playing for Team Republican are doing so in the hope that they will then be able to alter Republican Party policies to make them less destructive. But in the meanwhile they should admit--at least to themselves--what the aims and goals of their political masters are.

End Double Mandate to Save Fed’s Independence: As justices have weighed in on questions that were traditionally the province of elected officials -- such as abortion rights -- political institutions have fought back by making ideological orthodoxy a requirement for a Supreme Court appointment. What’s worse is that a similar dynamic is now occurring at… the Federal Reserve Board….