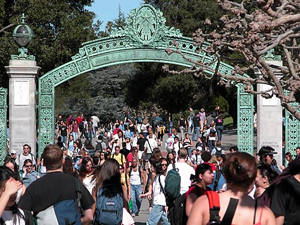 These five plus additional members [1] form the entire selection committee. The faculty subgroup has the largest role in vetting candidates for selection to the full committee…. [I] expect that the search will last through October or perhaps longer…. If you'd like to have something presented, please e-mail it to me and I'll include it both in the summaries, and in the combined package that I deliver….

Well, as you know Bob…

The first priority in choosing a new chancellor is to choose one who can successfully execute a strategy to keep Berkeley great--to reinforce the reasons that it is worthwhile keeping a university like Berkeley around at all.

The days of Clark Kerr are over. The belief that the taxpayers of California should pay for the young citizens of California to get as much education as they want for free is no longer politically popular. Would that if were still. The old social democratic belief that America should have the best universal free public education system in the world was a principal source of America's relative prosperity and economic leadership for a century. Now that the political coalition that supported that belief is gone, America will be a much less exceptional place.

But those days are gone. Chancellors can no longer rely on the legislature of California to fund Berkeley at the level needed to keep it an exceptional university. Berkeley needs another and a different strategy.

The strategy that Berkeley has settled on is to seek to produce the funding stream necessary to maintain a great University by becoming a finishing school for the superrich of Asia. This may be the wrong strategy--I sometimes think so, many others think so, and you can certainly argue so.

But it is the strategy that we have.

And the worst strategy of all is to have no strategy.

A bad strategy is vastly preferable to no strategy, or to an unimplemented strategy.

So we need a chancellor who can implement the strategy that we have.

Such a chancellor would throw money at three areas:

Throwing money like water at key areas that require expansion and emphasis in a time of general budgetary retrenchment is the hardest thing an academic administrator can ever do. Yet if the next Berkeley Chancellor does not, the Berkeley strategy for rebalancing its finances will fail. And Berkeley as we know it will rapidly cease to exist--it will become just another urban state university campus, rather than something exceptional and valuable.

I wish Berkeley's next Chancellor enormous amounts of luck and skill.

He or she will definitely need it.