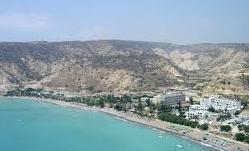 Scratch one stupid idea [Updated]: Monday morning’s Eurogroup statement on Cyprus…. Count how many times they now promise that insured deposits below €100k will not be bailed-in. There is a lot of mind-bleach being pushed on Europeans here. Still, a deal’s a deal. So, the bullet-points from the Annex:

Eurogroup chair Jeroen Dijsselbloem told the press to “forget” the €5.8bn figure which had previously been expected from Cypriot bank bail-ins. (Again, mind-bleach.) Clearly the number has shot northward: Dijsselbloem told Reuters that €4.2bn would be wrought from Laiki’s uninsured depositors alone. The actual official money going to Cyprus for budgetary financing will remain at €10bn… supposed to be the [numbers] at which a) Cypriot banks aren’t broke b) Cyprus the sovereign can sustainably pay its debts…. As for capital controls to limit uninsured depositors in Laiki and Bank of Cyprus getting out of Dodge — the Eurogroup “stresses that these administrative measures will be temporary, proportionate and non-discriminatory”. Otherwise this reads like a big “YOURS” to the Cypriot government on whether and how to impose these controls….

Some quick thoughts in a bit…

1) In case you didn’t get the memo the first time, this still isn’t about spanking money-launderers. No Icelandic-style separation of the domestic sheep from the foreign depositor goats here, if that was even possible…. Using the distinction made by Pawelmorski, the system will be saved by this deal but the sector’s future is grim.

2) It’s a depositor bail-in — for two specific banks, one of which is in full resolution. Like I said in one or two earlier posts, you’ll find no objection here to burning uninsured depositors of failing banks. Go back to this one in particular for why deposits were generally (some might say, uniquely) in the firing line in the Cypriot crisis…. Laiki’s uninsured deposits are sent to the bad bank, where their ultimate haircut will depend on the recovery of the assets sold from its balance sheet…. What happens to BoC’s uninsured deposits is more interesting. Again, freezing the deposits might not set a massive precedent but this all being done to achieve recapitalisation (through a swap into equity) rather than through a full wind-down process. It happens in emerging markets (sometimes) but this is new for the eurozone. Charlemagne says the haircut could be 35 per cent. Would large depositors have preferred taking a double-digit tax (a cost of doing business?) over being frozen for an unspecified period of time? Something to ask your Cypriot MP last Monday.

Incidentally, there was no sign of contrition at the Eurogroup presser about the grievous mistakes of the first deal. If anything, they were all rather smug about how clever the new arrangement was….

3) It’s also a senior bank bond bail-in. Holders of Laiki’s senior unsecured debt look fully wiped out…. I found Olli Rehn’s insistence that there was “no change of doctrine” here pretty unconvincing. While I guess Irish citizens who watched Anglo pay out its senior bonds for all that time will be pretty miffed.

4) Emergency Liquidity Assistance. Was this the week we found out that ELA will be protected from default no matter what? The transfer of Laiki’s massive €9bn ELA bill to BoC was a sticking point of getting a deal on Sunday night…. [T]he ELA remains, and will likely be called upon to mop up banks’ funding problems if insured deposits continue to bleed out (given the destruction of trust over the last week).

5) Finally, the DSA. This deserves a post to itself really. But Christine Lagarde (whose fund has the DSA experts) confirmed that Cyprus is still booked in to achieve 100 per cent debt to GDP by 2020. The transfer of the two big Cypriot banks’ Greek units to Greek control (i.e. Cyprus isn’t liable for them) seems to put this goal back on track. But everyone around the table last night must have known how badly the economy was hit last week, and how the depositor haircuts will go on to choke conditions…

Scratch one stupid idea [Updated]: Monday morning’s Eurogroup statement on Cyprus…. Count how many times they now promise that insured deposits below €100k will not be bailed-in. There is a lot of mind-bleach being pushed on Europeans here. Still, a deal’s a deal. So, the bullet-points from the Annex: