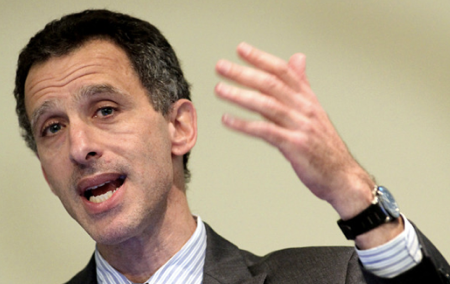 The recent emergence of Obama Federal Reserve Board appointee Jeremy Stein as the intellectual leader of those engaged in trying to push the Federal Reserve to abandon its policy of persistent low interest rates and massive asset purchases as soon as possible raises the task of understanding the argument for monetary tightening now--and, if it turns out to be wrong, critiquing it--to PRIORITY #1 RED DELTA OMEGA.

And sometimes the people are smarter than I am and done their homework. Then I have a very hard task indeed--and readers should understand that for them to bet on the correctness of my conclusions would not be to maximize expected value. Jeremy Stein is such a case.

As I understand Jeremy Stein's view, it goes more or less like this:

Bankers want profits. Bankers fear reporting losses, for a bank officer who reports a loss is likely to lose his or her job. And a bank has costs above and beyond the returns on its portfolio. For each dollar of deposits it collects, a bank must spend 2.5 cents per year servicing those deposits.

In normal times, when interest rates are well above 2.5 percent per year, banks have a normal, sensible attitude to risk and return. They will accept greater risk only if they come with returns higher enough to actually diminish the chances of reporting a loss. But when interest rates fall low enough that even the most sensible portfolio cannot reliably deliver a return on the portfolio high enough to cover the 2.5 cent per year cost of managing deposits, a bank will "reach for yield" and start writing correlated unhedged out-of-the-money puts so that it covers its 2.5 percent per year hurdle unless its little world blows up. Banks stop reducing their risk as falling returns mean that diversification and margin can no longer be counted on to manage them but instead embrace risks. They are not gambling for resurrection--they are not insolvent. But they are gambling for job tenure--and they do so in ways that regulators are unlikely to be able to catch.

In the late 1980s, when the savings and loans of Texas found themselves underwater, they mobilized their senators to get them regulatory forbearance so that they could use risk, chance, and the government's guarantee of their deposits to try to refloat themselves. If they did not try, they would be shut down. If they won, good. And if they lost--well, that was the government's problem. They lost--and the government had to set up the RTC and ride out the 1991 recession.

Stein's contention is that the same processes are now growing in America's commercial banking sector, growing larger with each year that interest rates remain at their current super-sub-normal levels.

It is Stein's judgment that right now whatever benefits are being provided to employment and production by the Federal Reserve's super-sub-normal interest rate policy and aggressive quantitative easing are outweighed by the risks being run by banks that are reaching for yield.

I do not know why this is Stein's judgment. I do not know how I would go about making such a judgment. I do think that Stein's arguments are one more reason that we ought to have a much more aggressive and expansionary fiscal policy--that we should not be satisfied with the current macroeconomic situation not just because of the out-of-equilibrium sub-normal level of employment, but also the out-of-equilibrium sub-normal level of interest rates--and a more aggressive and expansionary monetary policy via a higher inflation target as well.

The recent emergence of Obama Federal Reserve Board appointee Jeremy Stein as the intellectual leader of those engaged in trying to push the Federal Reserve to abandon its policy of persistent low interest rates and massive asset purchases as soon as possible raises the task of understanding the argument for monetary tightening now--and, if it turns out to be wrong, critiquing it--to PRIORITY #1 RED DELTA OMEGA.