Grasping Reality by Brad DeLong
Archives Highlighted Previous Edit COVID Market for Man Slavery 20th C. Reading 'Chicago'
Is a Higher Borrowing Trajectory Warranted or Not?
I Want to Subscribe to Five RSS Feeds I Am Not Currently Following That I Should...

Debating Alan Reynolds: Good to Know My Memory Is Not That Wrong... 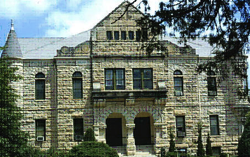 At last night's Kansas State's debate, I said that Alan Reynolds had been warning of an outbreak of inflation from Bernanke's monetary policies for 3.5 years now, and it had not happened. "Not me", he said. "You must be thinking of some other guy."

Paul Krugman appears, bringing the refreshments in the form of a reference…

And I gotta ask: "Why say that?" Yes, 400 K-State students heard you claim that I got something wrong about what you wrote. But the paper trail is there. And this page gets roughly 30,000 views…

Paul Krugman suggests it is simply foolish to worry that… the Federal Reserve might buy ("monetize") too much of that debt…. His column says, "A rising monetary base isn't inflationary when you're in a liquidity trap"….>In any bank crises, the public wants to hold more currency rather than bank deposits, and banks also want excess reserves as insurance against bank runs. Japan's central never adequately accommodated that demand for bank reserves and currency before 2001 (if then) nor did the Fed in 1929-33. But that does not mean (as the liquidity trap implies) that monetary policy was impotent and merely "pushing on a string."…

Even if Krugman's two historical examples of an alleged liquidity trap were not so obviously flawed, he also never managed to tie them in any way to recent events…. If Paul Krugman hopes to base his sanguine inflationary forecasts and go-go policy advice on historical analogies, he needs to (1) get the history right, and (2) show how that history is comparable to recent experience. On both counts, he failed. Again. 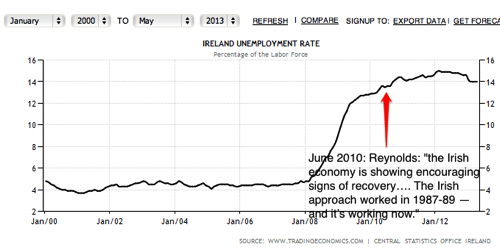 Plus a reference to:

Alan Reynolds: Irish approach vs. Grecian Formula: We don’t hear much about Ireland today. Why not? Because that country successfully repeated what it had done so boldly in the late 1980s — slash spending on payrolls and benefits, subsidies and transfer payments…. Ireland offers an admirable lesson in fiscal responsibility for Greece, Portugal and Spain — and, possibly, the United States.... Were spending to keep rising as it has during the Bush-Obama years, however, the U.S. debt could easily exceed 90 percent of GDP by 2020. At that level, the idea of the U.S. facing a crisis of Greek proportions is no joke.

“High debt/GDP levels (90 percent and above) are associated with notably lower growth,” economists Carmen Reinhardt of the University of Maryland and Kenneth Rogoff of Harvard write in the May issue of American Economic Review. They studied the effect of government debt on economic growth in 44 countries since 1900. When debt exceeds 90 percent of GDP among advanced countries, they found, annual economic growth slows from more than 3 percent to only 1.7 percent…. Alberto Alesina and Silvia Ardagna examined how 21 leading economies addressed government spending and taxes from 1970 to 2007…. Ireland, for example, first became a “Celtic tiger” by slashing government spending 6.9 percent from 1987 to 1989. Those spending cuts facilitated the celebrated 12.5 percent tax on corporate profits, plus substantial cuts in rates for personal income taxes, payroll taxes and consumption taxes. The Irish economy suddenly switched from a 0.2 percent rate of economic growth in the early 1980s to annual real GDP growth of 7.2 percent from 1989 to 2001….

In 2008-09, however, Ireland suffered one of the world’s worst housing and banking crises. But the government nonetheless avoided “fiscal stimulus” schemes. Instead, it cut spending by more than 6 percent. One important result was to preserve the government’s credit rating…. Unlike Greece, the Irish economy is showing encouraging signs of recovery. Manufacturing increased strongly in March and April, and consumer confidence and retail sales are also up. “The Irish approach to tackling the recent recession,” investment adviser Michael Johnston said, “was vastly different than the strategies implemented by the U.S. and much of the rest of the developed world. Most governments cranked the printing presses into high gear and began injecting round after round of capital into the global economy. Ireland went the opposite direction, imposing draconian budget cuts and reeling in government spending.”

This is a lesson that Washington should learn sooner rather than later.

Debating Alan Reynolds: Good to Know My Memory Is Not That Wrong...

At last night's Kansas State's debate, I said that Alan Reynolds had been warning of an outbreak of inflation from Bernanke's monetary policies for 3.5 years now, and it had not happened. "Not me", he said. "You must be thinking of some other guy."

Paul Krugman appears, bringing the refreshments in the form of a reference…