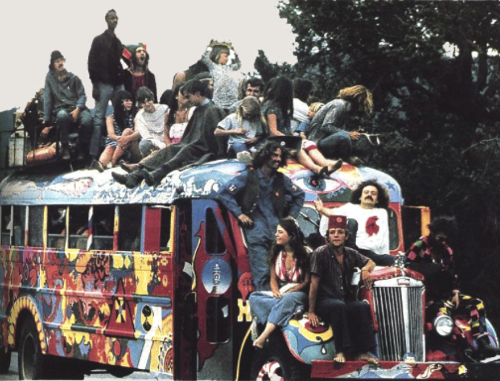 Paul Krugman is annoyed by the hippie-punching at the start of Ken Rogoff's Project Syndicate column, in which Ken lands blows on Paul "Groovy Beads, Man!" Krugman and Martin "Flower Power" Wolf.

Europe's Keynesian Problem: Brad DeLong tries to find nice things to say about Ken Rogoff’s latest. But he tries too hard. Rogoff’s piece is structured as an argument against Those Who — those who believe that Europe’s problems result solely from excessive austerity, and would all be solved with a bit of Keynesianism. It might help if he would name names; otherwise people might imagine that he’s talking about, say, Martin Wolf or me.... The Keynesian argument... has been that this inherently difficult situation is made worse by two aspects of fiscal policy. One is the extreme austerity being imposed on the periphery.... The other is that on any kind of rational pan-European basis, we should be seeing austerity in the periphery at least partly offset by stimulus in the core... looser fiscal policy would directly help... exports, and it would also help promote, yes, somewhat higher German inflation, helping achieve internal devaluation.... [Instead, he] insinuate[s]... a reduction in austerity would achieve nothing at all. This is not a helpful contribution.

I think that there is a genuine and important analytic point at issue here.

I think (and I think Paul thinks) of the IS curve relationship as the national income identity:

With consumption C depressed due to wealth destruction and over leverage, and with credit-channel problems gumming up attempts to use policy to induce businesses to boost investment I, I naturally turn to expanding government purchases G as a way to boost Y and rebalance the economy.

Ken, by contrast, sees the IS curve relationship instead as:

The economy's savings need to be placed in financial investment vehicles, and the amount of financial intermediaries are able to do depends on the current short term nominal interest rate i, expected future changes in the short-term nominal interest rates Δi, inflation π, and the quotient of the risk of bearing capacity of financial intermediaries and the riskiness of the potential loan portfolio ρ. Ken's view is one I associate with Joe Stiglitz and especially Karl Smith.

These two ways of looking at IS are, formally and mathematically, equivalent. But Ken's approach leads him to judge the Germany's debt capacity would be more fruitfully employed reducing the riskiness of portfolios, rather than simply borrowing to boost government purchases.

And I do hold my belief that Paul and I are right and Ken is wrong on this. As I wrote:

"From my perspective, if the German government spends on Germans, it produces a boom and inflation in Germany. If the boom continues long enough and is strong enough, German internal prices and costs rise--and southern Europe's and France's competitiveness problems melt away as the burden of the outstanding debt is reduced as well. Yes, it would be very nice if France and southern Europe as well were to undertake thorough-going pro-productivity pro-competitiveness social reforms, and Germany should demand them as the price of its raising its debt and borrowing to spend on Germans and so create a moderate-inflationary boom. But those reforms are not of the essence of the current short-term problem, which is too much debt in the periphery and too-high wage levels in the periphery and in France relative to Germany.

"By contrast, if the German government borrows to spend making Spanish creditors of Spanish banks whole--well, that does not generate the inflation in Germany that is the easiest path to eliminate Europe's internal structural wage imbalances, and it does generate a massive defeat for the government that adopts it in the next elections in the Bundesrepublik.

"As I see it, fiscal expansion in Germany is a stone that kills four birds: the boost-general-European-demand bird through directly boosting spending so that it matches full-employment incomes, the eliminate-structural-wage-level-imbalances bird through inflation, the through-inflation-impose-haircuts-on-creditors bird, and the make-the-German-electorate-happy bird.

"By contrast, as I see it at least, Ken's stone is a much more efficient stone, but it only hits two birds: the impose-haircuts-on-creditors bird, and the boost-general-European-demand bird as reductions in debt burdens diminish the desire of those on whom haircuts have been imposed to lend in the future and also increase the desire of those who were underwater to resume normal borrowing patterns. To hit four birds with one stone is, I think, better than to hit two."

Paul Krugman is annoyed by the hippie-punching at the start of Ken Rogoff's Project Syndicate column, in which Ken lands blows on Paul "Groovy Beads, Man!" Krugman and Martin "Flower Power" Wolf.