Michael Kinsley's Repeated Factual Errors: Why Oh Why Can't We Have a Better Press Corps?

Dan Drezner is sick of trying to reason with Michael Kinsley:

Sometimes a factual error is just a factual error: I've spent a rather alarming portion of this week wading into intellectual pissing matches, so I'm loath to respond to Michael Kinsley's response to last week's brouhaha over austerity policies. But one paragraph does merit a response. After noting the backlash to his last column, Kinsley writes the following:

Kinsley assumes that it must be the second explanation, and then goes on from there.

I can't speak for anyone else who pushed back against Kinsley's column from last week. Speaking for myself, however, I blogged about it because Kinsley was "spectacularly and obviously wrong." I say this because almost everything I wrote in my response to Kinsley I knew at age 18 after taking Economics 101 in college.

To explain, let me focus on Kinsley's motivation for thinking that the austerians have a point:

Austerians believe, sincerely, that their path is the quicker one to prosperity in the longer run. This doesn’t mean that they have forgotten the lessons of Keynes and the Great Depression. It means that they remember the lessons of Paul Volcker and the Great Stagflation of the late 1970s. “Stimulus” is strong medicine—an addictive drug—and you don’t give the patient more than you absolutely have to.

This is wrong for three reasons, one pedantic and two substantive. First, to be pedantic, the austerity debate is about the wisdom of using expansionary fiscal policy -- i.e., running a significant federal budget deficit -- to alleviate downturns. Paul Volcker was the chairman of the Federal Reserve and thereby responsible for setting monetary policy. He had nothing to do with fiscal policy. This is a distinction that I learned in my first few lectures on macroeconomics. So either Kinsley phrased this badly or he's confused about what this debate is about.

The substantive errors can be explained more easily once you look at this chart of the budget deficit as a percentage of GDP: 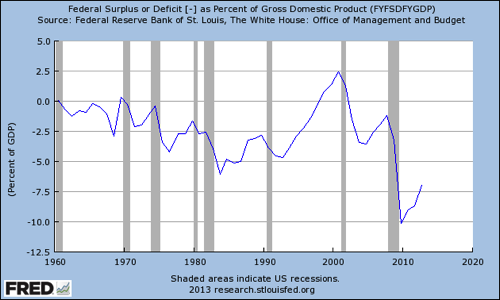 So, looking at the above, you find Kinsley's two substantive errors. First, during the period that Kinsley seems to find so relevant -- the late 70s -- you discover that the budget deficit as a percentage of GDP was shrinking and not growing. So, to repeat a theme, I'm not sure where Kinsley is getting this notion that expansionary fiscal policy is responsible for the high inflation of the 1970s [Maybe Kinsley would argue that stagflation was an aftereffect of the spending pike that followed the 1973-1975 recession?! --ed. OK, except a glance at that chart shows that compared to the 1980s, the 1970s was a period of fiscal probity. Oh, and as I said before, there was that whole expansionary monetary policy/commodity price shock thing happening as well. Which I learned about from my Econ 101 textbook oh so many moons ago.]

Second, contra Kinsley (and Charles Lane while we're at it), stimulus is not an addictive medicine. The above graph shows budget deficits expanding during recessions and then shrinking again as the economy recovers.

Look, this isn't rocket science -- Kinsley made an argument about austerity that got a lot of basic economic facts about the 1970s and the current era very, very wrong. Dare I say, spectacularly and obviously wrong.

So there's really no point in further discussion.

A plain blog about politics: Dept. of Missing the Point (Kinsley ed.): A wonderful example of the myopia of the deficit scolds...

The background is that Michael Kinsley wrote a particularly bad column last week about "austerity," a key point of which was based on factually incorrect memories of what went wrong in the 1970s; as you can imagine, this earned him plenty of corrections and dismissals from people who used access to accurate economic and government policy statistics.

Kinsley was quite taken aback by this, apparently, and wrote a follow up to defend himself. Dan Drezner has already pointed out that Kinsley is still relying on the same inaccurate memories that got his first column into trouble, but I actually found a different part of Kinsley II more interesting, in which he thinks he's caught Paul Krugman in a contradiction.

Paul Krugman takes credit for good economic news whenever it happens. On Krugman’s blog site (“The Conscience of a Liberal”) last week were two bits of prose side-by-side. One was an ad for his latest book, End This Depression Now! “How bad have things gotten?” the ad asks rhetorically.” How did we get stuck in what now can only be called a depression?” Right next door is Krugman’s gloat about the recent pretty-good economic news. “So where are the celebrations,” he asks, “now that the debt issue looks, if not solved, at least greatly mitigated?” Greatly mitigated? By what? Certainly not by anyone taking Paul Krugman’s advice. He has been, in his own self-estimate, a lone, ignored voice for reason crying out in an unreasoning universe.

What's the problem? The linked post by Krugman isn't a gloat about good economic news! It is, to be sure a gloat; it's a gloat about deficits...Krugman goes so far as to call lower deficits "progress," although as I read it he's really just saying that lower deficits should be counted as progress from the point of view of the deficit scolds.

What's happening here is that Kinsley is projecting onto Krugman a classic deficit scold mistake; Kinsley is conflating the federal budget deficit with the economy. Krugman isn't doing that; it's purely Kinsley's invention.

It gets, however, to exactly why Kinsley was buried under a large pile of abuse after his first column. Well, in part; the other part, as Krugman notes elsewhere, is "the existence now of a policy blogosphere...which makes bluffing harder." Say something factually inaccurate these days, and you're going to get slammed; it seems that some pundits who preceded that development find it hard to get used to it.

But the other part is conflating the federal budget deficit and the economy is really a pretty big deal. It might even explain, by the way, Kinsley's faulty memories of the 1970s; if bad economic times are synonymous with large budget deficits, then there "must" have been deficits back then. It's less of a argument about deficits causing bad times than a tautology about deficits meaning bad times.

And the problem is that outside the myopia of deficit scolds, there are real policy choices about fiscal policy. Which are extremely difficult to make well when a large part of the political culture is trapped inside, well, deficit nonsense.

Michael Kinsley's Repeated Factual Errors: Why Oh Why Can't We Have a Better Press Corps?

Dan Drezner is sick of trying to reason with Michael Kinsley:

Sometimes a factual error is just a factual error: I've spent a rather alarming portion of this week wading into intellectual pissing matches, so I'm loath to respond to Michael Kinsley's response to last week's brouhaha over austerity policies. But one paragraph does merit a response. After noting the backlash to his last column, Kinsley writes the following: