Moby Ben, or, The Washington Super-Whale: Hedge Fundies, the Federal Reserve, and Bernanke-Hatred

In February 2012, a number of hedge fund traders noted one particular index--CDX IG 9--that seemed to be underpriced. It seemed to be cheaper to buy credit default protection on the 125 companies that made the index by buying the index than by buying protection on the 125 companies one by one. This was an obvious short-term moneymaking opportunity: Buy the index, sell its component short, in short order either the index will rise or the components will fall in value, and then you will be able to quickly close out your position with a large profit.

But February passed, and March passed, and April rolled in, and the gap between the price of CDX IG 9 and what the hedge fund traders thought it should be grew. And their bosses asked them questions, like: "Shouldn't this trade have converged by now?" "Have you missed something?" "How much longer do you want to tie up our risk-bearing capacity here?" "Isn't it time to liquidate--albeit at a loss?"

So they got annoyed.

And they went public, hoping that they could induce the bosses of the London Whale to force him to unwind his possession, in which case they would profit immensely not just when the value of CDX IG 9 returned to its fundamental but by price pressure as the London Whale had to find people to transact with. And so we had 'London Whale' Rattles Debt Market, and similar stories

The London Whale was Bruno Iksil. He had been losing, and rolling double or nothing, and losing again for months. His boss, Ina Drew, took a look at his positions. They found they had a choice: they could hold the portfolio and thus go all-in, or they could fold. They could hold CDX IG 9 until maturity--make a fortune if a fewer-than-expected number of its 125 companies went bankrupt, and lose J.P. Morgan Chase entirely to bankruptcy if more did. Or they could take their $6 billion loss and go home. They could either take their losses, or sing "Luck, Be a Lady Tonight!" and bet J.P. Morgan Chase on a single crapshoot. After all, what could they do if the bet went wrong and they had to eat losses at maturity? J.P. Morgan Chase couldn't print money. So Drew stood Iksil down, and the hedge fund traders had their happy ending. And they ran into the widowmaker. 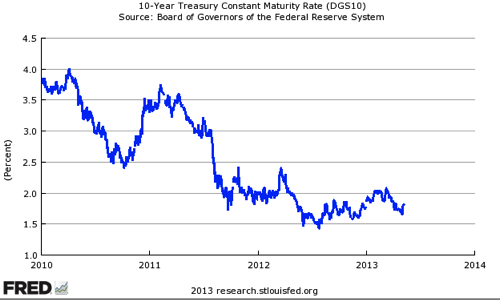 So they scrambled around, wondering: "Why did the interest rate on the Ten-Year Treasury peak at 4%? And why has it gone down since then? And why won't it go back to its 5%-7% fundamental." And they looked around. And they found Ben Bernanke: He had printed-up reserve deposits, and used them to buy Treasury Bonds, and in so doing, they thought, had pushed the price of Treasuries up well beyond their fundamentals. Yet rather than easing off, taking his lumps, and letting the market "clear" he kept buying and buying and buying and buying, leaving the hedge fund traders with larger and larger and larger short positions in Treasuries that had to be carried at a loss. And every year that they carry those positions is a -2% times the size of the long leg negative entry in their cash flow.

But what Bernanke was doing, they thought, was as unprofessional as it would have been for Ina Drew to tell Bruno Iksil: "You turn out to have made a large directional bet that we can sell unhedged protection and profit? Let's see if you are right: let it ride!"

And so they went public with the Washington Super-Whale, as they had gone public with the London Whale. Perhaps somewhere out there was an equivalent of Jamie Dimon who could tell Bernanke that it was time to unwind the Federal Reserve's balance sheet now? Jeremy Stein, perhaps?

From my perspective, of course, the hedge fundies' analogy between the London Whale and the Washington Super-Whale is all wrong--the hedge fundies are thinking partial-equilibrium when they should be thinking general equilibrium. CDX IG 9 has a well-defined fundamental value: the payouts should each of the 125 companies go bankrupt times the chance that they will. What Bruno Iksil does does not affect that fundamental value. He can bet, and drive the price, but he cannot change the fundamental.

But the Washington Super-Whale is different.

In a healthy economy, the Ten-Year Treasury Bond does have a well-defined fundamental. When the economy is healthy enough that pricing power reverts to workers and keeping inflation from rising is job #1 for the Federal Reserve, the level of the Federal Funds rate now and in the future is pinned down by the requirement to hit the inflation target. And the fundamental of the Ten-Year Treasury Bond is then the expected value over the bond's lifetime of the future Federal Funds rate plus the appropriate ex ante duration risk premium.

But when the economy is depressed, like now? When market appetite for short-term cash at a zero interest rate is unlimited, like now? When workers have no pricing power, and so wage inflation is subdued, like now? The Federal Reserve is not J.P. Morgan Chase. It is not a highly-leveraged financial institution that must worry about holding too much duration risk. As Glenn Rudebusch once said:

Our business model here at the Fed is simple: (i) print reserve deposits that cost us 0 (OK. 0.25%/yer), (2) invest them in interest-paying bonds that we then hold to maturity, (3) PROFIT!!

And the more quantitative easing the Fed undertakes and the larger is its balance sheet the larger is the amount of money the Federal Reserve makes on its portfolio, without running any risks--as long as the economy remains depressed.

But, the hedge fundies say: "What if the economy recovers and starts to boom? What if inflation shoots up? The Fed could loose $500 billion on its portfolio as it moves to control inflation! Why doesn't that fear that?"

"But," the hedgies say, "George Soros! The Bank of England held the pound sterling away from fundamentals in 1992, and George Soros bet against them and they could not maintain the parity and George Soros took them for $2 billion! Why aren't we doing the same?" Ah. But George Soros took $2 billion from the Bank of England because its political masters told it to stand down: "We will not," they said, "defend the ERM pound parity at the price of bringing on a deep recession and mass unemployment." Who do the hedgies imagine are the Fed's political masters who will tell it to shift and adopt policies that will bring on even massier unemployment? Rand Paul?

There is a reason that the trade of shorting the bonds of a sovereign issuer of a global reserve currency in a depressed economy is called "the widowmaker".

Moby Ben, or, The Washington Super-Whale: Hedge Fundies, the Federal Reserve, and Bernanke-Hatred

In February 2012, a number of hedge fund traders noted one particular index--CDX IG 9--that seemed to be underpriced. It seemed to be cheaper to buy credit default protection on the 125 companies that made the index by buying the index than by buying protection on the 125 companies one by one. This was an obvious short-term moneymaking opportunity: Buy the index, sell its component short, in short order either the index will rise or the components will fall in value, and then you will be able to quickly close out your position with a large profit.