…is in the Hotel Ukraina, on Kutuzovsky Prospekt on the bank of the Moscow River, across the river from Gazprom HQ and the Russian Federation's White House: 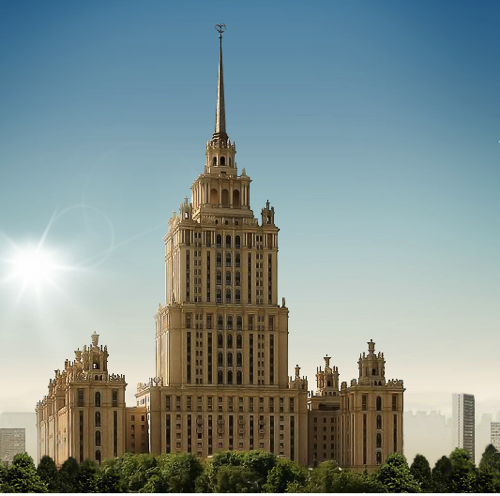 "‘In our day,’ Nikita Khrushchev told a crowd in the Lenin Stadium of Moscow on 28 September 1959, ‘the dreams mankind cherished for ages, dreams expressed in fairytales which seemed sheer fantasy, are being translated into reality by man’s own hands.’ He meant, above all, the skazki‘s dreams of abundance."

There was a bench by the wall at the end of the dacha's grounds, overlooking a wheat field. Sometimes tourists came walking along the field path, and wanted to have their pictures taken with him, when they found the former First Secretary [Nikita Sergeyevich Khrushchev] sitting there. Nobody was on the path today. There was only the grey heat of August, and himself sitting in his shirt and his hat, with his shortwave radio and the tape recorder his son had given him to record his memoirs….

It was worst if he was stupid enough ever to watch a war film…. [T]here were things to be proud of, after all, about the war. All those brave boys they had bludgeoned on toward the enemy--well, the bravery had been real as well as the bludgeoning; real enough to make you weep. And they had rid the world of a great evil. That was true….

It was later that it would all turn poisonous: in the night. He would dream… out would come the other memories…. [T]he groaning trees in the western Ukraine in '45, when the NKVD hangmen had done their work, and the sight through an incautiously opened door in '37 where an interrogator had been demonstrating the possibilities of a simple steel ruler, and the starveling child vomiting grass during collectivization. And more. And worse.

So much blood, and only one justification for it. Only one reason it could have been all right to have done such things… if it had been all prologue, all only the last spasms of death in the old, cruel world…. Today the radio was reporting that Budapest had come round again, just like the time he sent the tanks in; only this time it was Prague…. He fumbled with the tape machine… found the RECORD key….

"Paradise", he told the wheat field in baffled fury,

And then… the retired monster sat very still on the bench by the field….

Three thousand kilometers east it is already night… Leonid Vitalevich [Kantorovich] is sitting by himself optimizing the manufacture of steel tubes. Five hundred producers. Sixty thousand consumers. Eight hundred thousand allocation orders to be issued each year. But it would all work out if he could persuade them to measure output in correct units…

…is in the Hotel Ukraina, on Kutuzovsky Prospekt on the bank of the Moscow River, across the river from Gazprom HQ and the Russian Federation's White House: