Barry Goldwater Declares That the 1964 Civil Rights Act Is a Dire Threat to the Liberties of African Americans and Will Create in America the Hallmarks of the Police State: Live from Lynnhaven Fish House CCII: June 23, 2014 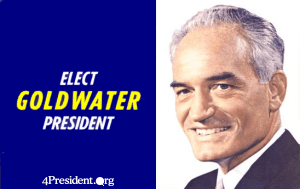 It's because he cares about the liberties of Blacks that Goldwater has to vote against it, you see...

Note, also, that to Goldwater:

And do note that what Barry Goldwater called "sledgehammer political tactics" produced not a 50-50 tie broken by the vice president, or a 60-40 vote, but a 73-27 vote...

There have been few, if any, occasions when the searching of my conscience and the re-examination of my views of our constitutional system have played a greater part in the determination of my vote than they have on this occasion.

I am unalterably opposed to discrimination or segregation on the basis of race, color, or creed, or on any other basis; not only my words, but more importantly my actions through the years have repeatedly demonstrated the sincerity of my feeling in this regard.

This is fundamentally a matter of the heart. The problems of discrimination can never by cured by laws alone; but I would be the first to agree that laws can help--laws carefully considered and weighed in an atmosphere of dispassion, in the absence of political demagoguery, and in the light of fundamental constitutional principles.

For example, throughout my 12 years as a member of the Senate Labor and Public Welfare Committee, I have repeatedly offered amendments to bills pertaining to labor that would end discrimination in unions, and repeatedly those amendments have been turned down by the very members of both parties who now so vociferously support the present approach to the solution of our problem. Talk is one thing, action is another, and until the members of this body and the people of this country realize this, there will be no real solution to the problem we fact.

To be sure, a calm environment for the consideration of any law dealing with human relationships is not easily attained--emotions run high, political pressures become great, and objectivity is at a premium. Nevertheless, deliberation and calmness are indispensable to success.

It was in this context that I maintained high hopes for this current legislation--high hopes that, notwithstanding the glaring defects of the measure as it reached us from the other body and the sledge-hammer political tactics which produced it, this legislation, through the actions of what was once considered the greatest deliberative body on earth, would emerge in a form both effective for its lofty purposes and acceptable to all freedom-loving people.

It is with great sadness that I realize the non-fulfillment of these high hopes. My hopes were shattered when it became clear that emotion and political pressure, not persuasion, not common sense, not deliberation, had become the rule of the day and of the processes of this great body.

One has only to review the defeat of common sense amendments to this bill--amendments that would in no way harm it but would, in fact, improve it--to realize that political pressure, not persuasion or common sense, has come to rule the consideration of this measures.

I realize fully that the Federal Government has a responsibility in the field of civil rights. I supported the civil rights bills which were enacted in 1957 and 1960, and my public utterances during the debates on those measures and since reveal clearly the areas in which I feel Federal responsibility lies and Federal legislation on this subject can be both effective and appropriate. Many of those areas are encompassed in this bill and to that extent, I favor it.

I wish to make myself perfectly clear. The two portion so this bill to which I have constantly and consistently voiced objections, and which are of such overriding significance that they are determinative of my vote on the entire measure, are thoe which would embark the Federal Government on a regulatory course of action in the area of so-called "public accommodations" and in the area of employment--to be precise, Titles II and VII of the bill. I find no constitutional basis for the exercise of Federal regulatory authority in either of these areas; and I believe the attempted usurpation of such power to be a grave threat to the very essence of our basic system of government, namely, that of a constitutional government in which 50 sovereign states have reserved to themselves and to the people those powers not specifically granted to the central or Federal Government.

If it is the wish of the American people that the Federal Government should be granted the power to regulate in this two areas and in the manner contemplated by tho bill, then I say the Constitution should be so amended as to authorize such action in accordance with the procedures for amending the Constitution which that great document itself prescribes. I say further that for this great legislative body to ignore the Constitution and the fundamental concepts of our governmental system is to act in a manner which could ultimately destroy the freedom of all American citizens, including the freedoms of the very persons whose feelings and whose liberties are the major subject of this legislation.

My basic objection to this measure is, therefore, constitutional, but in addition I would like to point out to my colleagues in the Senate and to the people of America, regardless of their race, color or creed, the implications involved in the enforcement of regulatory legislation of this sort. To give genuine effect to the prohibitions of tho bill will require the creation of a Federal police force of mammoth proportions. It also bids fair to result in the development of an "informer" psychology in great areas of our national life--neighbors spying on neighbors, workers spying on workers, businessmen spying on businessen, where those who would dharass their fellow citizens for selfish and narrow purposes will have ample inducement to do so. These, the Federal police force and an "informer" psychology, are the hallmarks of the police state and landmarks in the destruction of a free society.

I repeat again: I am unalterably opposed to discrimination of any sort and I believe that though the problem is fundamentally one of the heart, some law can help--but not law that embodies features like these, provisions which fly in the face of the Constitution and which require for their effective execution the creation of a police state. And so, because I am unalterably opposed to any threats to our great system of government and the loss of our God-given liberties, I shall vote "No" on this bill.

This vote will be reluctantly cast, because I had hoped to be able to vote "Yea" on this measure as I have on the civil right bills which have preceded it; but I cannot in good conscience to the oath that I took when assuming office, cast my vote in the affirmative. With the exception of Titles II and VII, I could wholeheartedly support this bill; but with their inclusion, not measurably improved by the compromise version we have been working on, my vote must by "No".

If my vote is misconstrued, let it be, and let me suffer its consequences. Just let me be judged in this by the real concern I have voiced here and not by words that others may speak or by what others may say about what I thick.

It is the general welfare that must be considered now, not just the special appeals for special welfare. This is the time to attend to the liberties of all.

This is my concern. And this is where I stand.

Barry Goldwater Declares That the 1964 Civil Rights Act Is a Dire Threat to the Liberties of African Americans and Will Create in America the Hallmarks of the Police State: Live from Lynnhaven Fish House CCII: June 23, 2014

It's because he cares about the liberties of Blacks that Goldwater has to vote against it, you see...

Note, also, that to Goldwater:

And do note that what Barry Goldwater called "sledgehammer political tactics" produced not a 50-50 tie broken by the vice president, or a 60-40 vote, but a 73-27 vote...