Liveblogging World War I: September 7, 1914: Taxis to the Marne 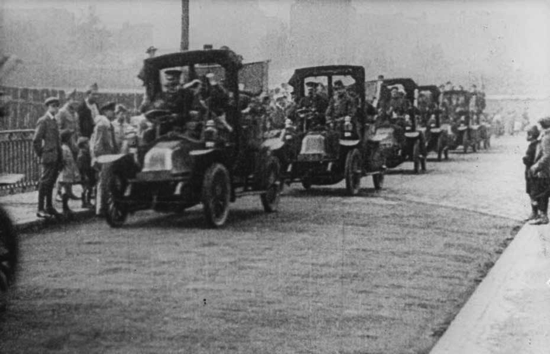 From The Campaign of the Marne by Sewell Tyng:

The receipt of Von Moltke's message in the early morning of the 7th threw a new light on the whole situation, and at 9 A.M. [von Kluck] sent Von Bülow a radio:    The 2nd, 4th and 4th Reserve Corps are engaged in a hard combat west of the lower Ourcq. Where are the 3rd and 9th Corps? What is your situation?

At almost the same time Von Bülow was sending a message that crossed Von Kluck's:    The II Army is continuing the battle. So far no decision. What is your situation? Reply urgent.

In spite of the knowledge thus gained that the II Army too was in action, Von Kluck determined to recall the 3rd and 9th Corps north of the Marne to unite his forces for a crushing blow against Maunoury. Though he realized that this action necessarily entailed increasing the gap between the I and II Armies and adding to the difficulties of Von Bülow's right flank, he relied heavily upon the supposed inability of the British Army to exploit the advantage that lay open to it, trusting to the two cavalry corps to hold any British advance in check. Two hours after his first message Von Kluck sent another:    Intervention of the 3rd and 9th Corps on the Ourcq immediately necessary. The enemy is reinforcing seriously. Please start both corps marching for La Ferté Milon and Crouy.

This communication left Von Bülow no choice but to accede reluctantly to his colleague's demand. Convinced that the I Army must be in a situation of deadly peril, the commander of the II Army responded at once, and the 3rd and 9th Corps left the area where they had been fighting in liaison with the right wing of the II Army and started to march northward to take part in the Battle of the Ourcq. Lack of adequate communications with G.H.Q. at Luxembourg or with the Headquarters of the Army at Montmort, obliged Von Kluck on September 7th to take the decision that in its strategic consequences proved the most important of the campaign, without consulting either Von Moltke or Von Bülow. It is entirely likely, however, that had he done so, the result would have been the same, for in his determination to rob Peter to pay Paul, Von Kluck based his decision upon a misconception which Von Moltke and Von Bülow shared with him: that the British Army could not and would not fight. The development of the breach between Von Kluck's and Von Bülow's Armies, the exploitation of which is the key to the German defeat, may be traced primarily to the withdrawal of the 3rd and 9th Corps.

If Von Kluck could have been transported to Maunoury's Headquarters on the night of September 7th, he would have found much to comfort him. The 61st Reserve Division, which had given ground at the close of the day on the northern extremity of the French front, had continued its retreat in disorder as far as Nanteuil, and to make matters worse, Sordet's Cavalry Corps, which had arrived on the extreme left of the Sixth Army, as usual in an exhausted condition, had also seen fit to fall back through a mistaken notion of its commander that he might thus gain rest for his men and horses. With consternation the French Army Commander learned of these movements, which had temporarily completely uncovered his Army's northern flank, and he forthwith issued peremptory orders to remedy the situation, sending both the Cavalry Corps and the 61st Reserve Division back to their respective posts.

In support of the Reserve division and to stiffen its resistance, he also sent the 7th Division of the 4th Army Corps (Boelle) to the left of his line. The transportation of a part of this division to the front during the night of September 7th forms the basis of one of the most colourful stories of the war, the use of the Paris taxicabs. The incident has been exaggerated to legendary dimensions, and has been related so many times with such a variety of elaborations and embellishments, that in the mind of the general public, and apparently in the view of some historians as well, it has come to be regarded as one of the principal events not only of the Battle of the Marne, but of the whole war.

The facts are simple and from a military point of view relatively unimportant. The staff, the services, the artillery and the greater part of the infantry of the French 7th Division travelled from Paris to the battlefield of the Ourcq by rail in the conventional way, but to make sure that in case of a break-down in the railway line a part at least of the much-needed reinforcements would arrive, the Military Governor of Paris decided to send two infantry regiments by automobile. For this purpose 1200 of the 10,000 taxicabs of Paris were utilized, the majority of them requisitioned on the streets of the city by the police during the day of the 7th. A fleet of 500 of these cabs made its way in mid-afternoon, empty, from the Invalides down the Champs Elysées and thence across the city, following the principal avenues and filling the population of the capital with astonishment and curiosity. At Gagny and other designated centres, the waiting infantry battalions embarked, and the cabs proceeded with their passengers in military formation—or as near to it as the temperament of Paris taxi-drivers would permit—through Dammartin to the vicinity of Nanteuil, where they arrived at daybreak after a journey of more than 50 kilometres.

Whatever may be said of the efficiency of this method of conveyance, the arrival of troops on the line of battle in taxicabs constituted a unique contribution to the history of military transportation, and it seems not unfair to assume that the dramatic quality of the event, and above all its publicity value, did not escape the Military Governor of Paris or his astute collaborators...

Liveblogging World War I: September 7, 1914: Taxis to the Marne

From The Campaign of the Marne by Sewell Tyng:

The receipt of Von Moltke's message in the early morning of the 7th threw a new light on the whole situation, and at 9 A.M. [von Kluck] sent Von Bülow a radio:    The 2nd, 4th and 4th Reserve Corps are engaged in a hard combat west of the lower Ourcq. Where are the 3rd and 9th Corps? What is your situation?

At almost the same time Von Bülow was sending a message that crossed Von Kluck's:    The II Army is continuing the battle. So far no decision. What is your situation? Reply urgent.