Monday Smackdown: Back to David Graeber's "Debt: the First 5000 Mistakes"

In the absence of even acceptable-quality DeLong Smackdowns this past week, what to do? Back to David Graeber! What do we have on the menu today? A continuation of our death march through chapter 11 of David Graeber's Debt, of course! 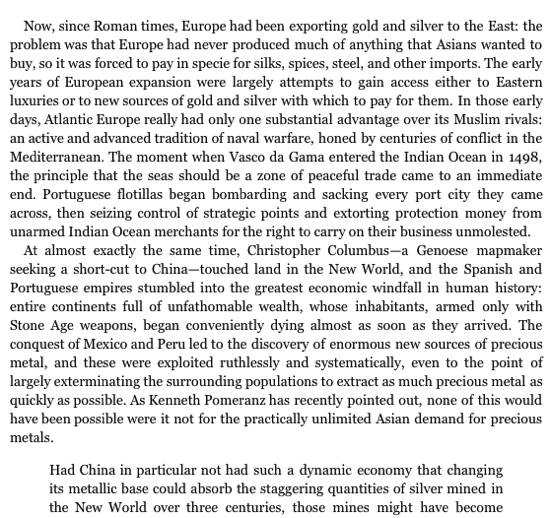 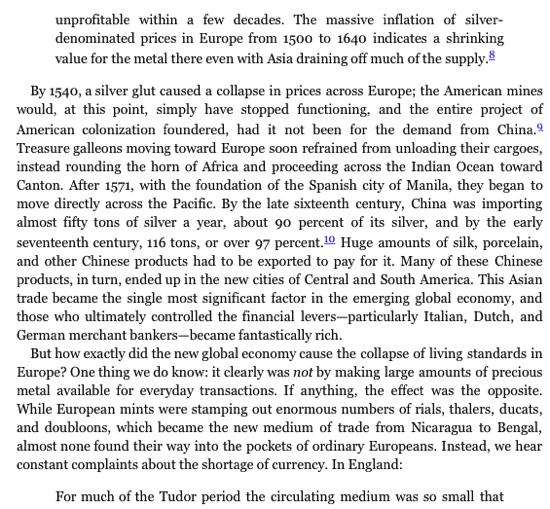 Can we read one more page to see? We can: 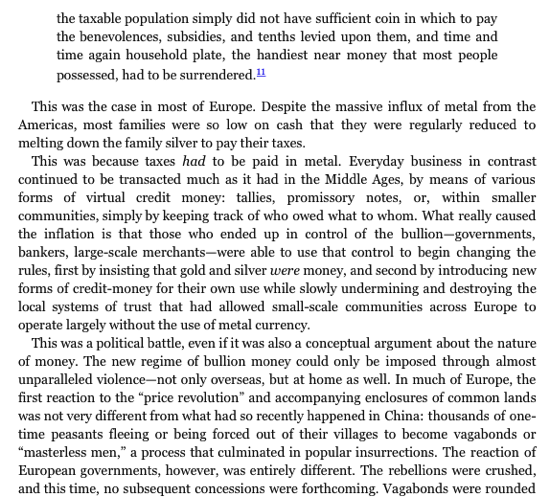 The "price revolution" meant that those whose dues to their feudal lords or whose long-term lease payments to their landlords were denominated not in commodities but in silver suddenly found it much easier to pay--and the feudal and land lords found that their receipts did not go as far. This is not a source of impoverishment. The enclosure of common lands? A very real process, but not one that had anything to do with the discovery of silver in America or the growing trade with Asia. "Thousands of one-time peasants being forced out of their villages"? The rural population of Europe did not fall but grew substantially. In England, for example, the population grew from roughly 2.5 million in 1400 to roughly 4 million in 1600 and 5.8 million by 1750.

This is really depressing. And I have no heart to read any further today.

The absence these days of what I regard as high-quality critiques of my writings on the internet poses me a substantial intellectual problem, since I have this space and this feature on my weblog: the DeLong Smackdown Watch. So what should I do with it? Counter-smacking inadequate and erroneous smack downs is, after all, not terribly satisfying. The fun is in absorbing and rethinking issues in response to cogent and interesting critiques.

But there is one task left undone, from April Fool's Day 2013. Then I dealt with chapter 12 of David Graeber's Debt: The First 5000 Years in the manner that that chapter richly deserved to be dealt with. But nobody has taken an equivalent look at the earlier chapters. So, henceforth, now, until and unless my critics step up their game, I'm going to devote the Monday DeLong Smackdown space to a close reading of chapter 11 of David Graeber's Debt: The First Five Thousand Years.

As you may or may not remember, my initial assessment of David Graeber's Debt: The First 5000 Years, gained from skimming the first several chapters, was rather positive:

Economic Anthropology: David Graeber Meets the Noise Machine...: ...and is annoyed at having his summary of anthropological findings dismissed as "nonsensical": David Graeber: On the Invention of Money:

I mentioned that the standard economic accounts of the emergence of money from barter appears to be wildly wrong... this contradicted a position taken by one of the gods of the Austrian pantheon.... Credit and debt comes first, then coinage emerges thousands of years later and then, when you do find 'I'll give you twenty chickens for that cow' type of barter systems, it's usually when there used to be cash markets, but for some reason--as in Russia, for example, in 1998--the currency collapses or disappears." Indeed. It really looks from the anthropologists that Adam Smith was wrong--that we are not animals that like to "truck, barter, and exchange" with strangers but rather gift-exchange pack animals--that we manufacture social solidarity by gift networks, and those who give the most valuable gifts acquire status hereby...

He soon fixed that positive assessment:

David Graeber: Apple Computers is a famous example: it was founded by (mostly Republican) computer engineers who broke from IBM in Silicon Valley in the 1980s, forming little democratic circles of twenty to forty people with their laptops in each other's garages...

And then he gave three contradictory and inconsistent explanations of how he came to write such a sentence demonstrating a previously-unseen total cluelessness about the economy in which he lived: The Very Last David Graeber Post...:

(1) Graeber claimed that it was perfectly true, but not of Apple but of other companies (none of which he has ever named)....

(2) Graeber, when questioned about the Apple passage by Mark Gimein, said that he believed he had been misled by Richard Wolff....

(3) And Graeber claimed that it was his editor/publisher's fault...

Things went downhill from there. And so when I finally got the change to read Graeber's chapter 12, on the post-1971 world, I read it with a jaundiced eye: dozens upon dozens of simple mistakes:

I looked, but could not find anybody masochistic enough give a similarly jaundiced reading to David Graeber's earlier chapters. So we began in on chapter 11. We had noted:

Monday Smackdown: Back to David Graeber's "Debt: the First 5000 Mistakes"

In the absence of even acceptable-quality DeLong Smackdowns this past week, what to do? Back to David Graeber! What do we have on the menu today? A continuation of our death march through chapter 11 of David Graeber's Debt, of course!