Over at Equitable Growth: Our Current Macroeconomic Problems Here in the United States: Daily Focus 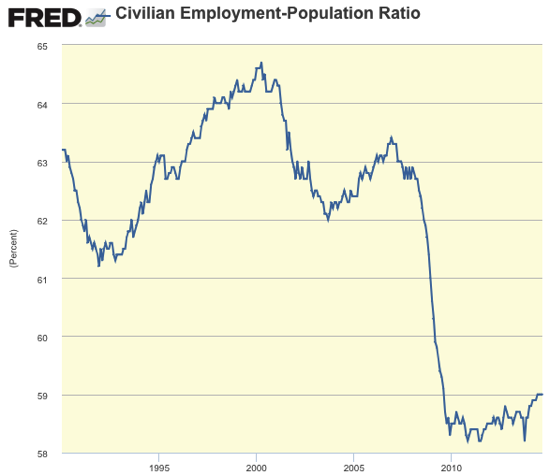 Over at Equitable Growth:

A puzzling piece from the very sharp Gillian Tett of the FT. My tentative conclusion was that she has fallen victim to the anthropologist's disease--getting so far into the heads and the mindsets of the culture she is observing that she loses track of the fact that there is a world outside. I have been holding this for a couple of days for two reasons:

But enough is enough... READ MOAR

Let us begin with the lesson:

Gillian Tett: Midterm Rational Exuberance Is Not Just for U.S. Republicans: "HBS alumni... asked to explain why America’s economic growth has been so dismal.... The most hated culprit was the political machine. Half... declared the US political process worse than that of any other leading nation.... Can the midterms change the mood?... With the Republicans controlling Congress, they finally have an incentive to... show voters in 2016 that they can actually get things done.... Trade is one obvious arena.... Infrastructure is another.... And corporate tax reform might--possibly--produce pleasant surprises....

This matters.... Company executives have been sitting frozen in recent years, reluctant to invest, because of uncertainty.... $2tn of spare cash is sitting on US corporate balance sheets... banks have another $2.8tn of funds sitting idly at the Federal Reserves.... If just a tiny proportion can be deployed, the economic impact could be significant. And if a few tangible policy changes emerge from Congress, it is possible animal spirits will return. Even amid the business elite, from Harvard and elsewhere, who have been trained to be so cynical about politicians’ ability to do anything at all.

But when I look at the numbers for the economy-wide components of fixed investment: 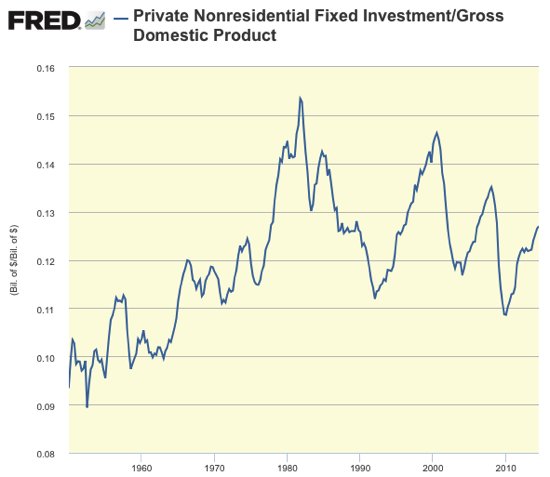 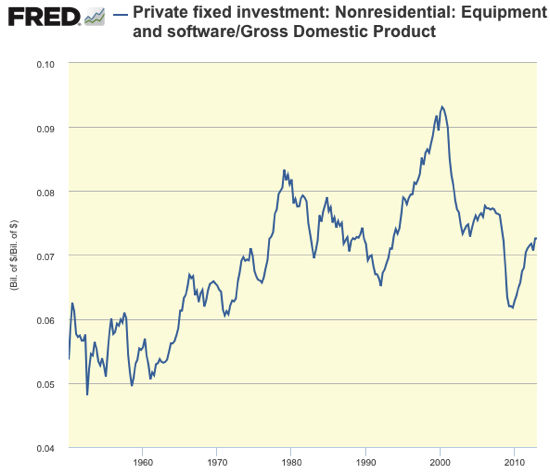 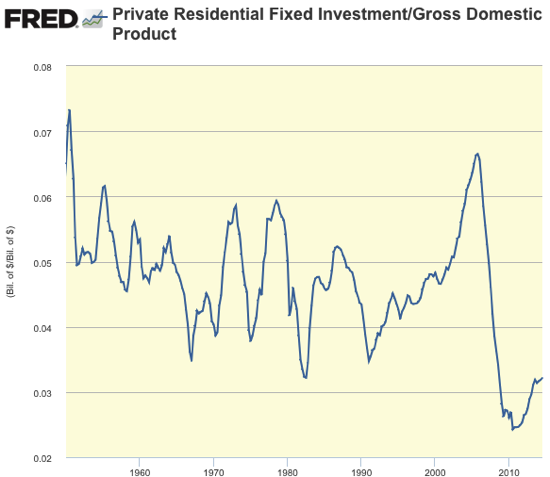 Depressed business animal spirits do not jump out at me. Private nonresidential fixed investment spending is above its average share of GDP since 1950. It is at its average since 1990. Private fixed investment in equipment and software spending is similarly above its post-1950 average. This variable is about 0.5%-points of GDP below its post-1990 average--but we are not experiencing a giddy high-tech dot-com bubble either. It is residential investment spending that is 1.8%-points below its post-1950 and 1.4%-points below its post-1990 average--and of this shortfall, all is in single-family housing and none in multiple-unit dwelling construction. And it is public infrastructure investment that is way low.

So when I look at this, I see an economy depressed because public investment and single-family residential construction are depressed. The first is depressed because of austerity: it's a policy choice. The second is depressed because the Obama administration has failed to take any of the steps that would have been necessary to unblock the clogged single family-housing finance credit channel. Business executives are depressed because the economy is depressed. But if you just looked at the graphs rather than talking to the people, you would not be inclined to reach for "uncertainty" to explain "reluctance to invest"--you would simply say that business investment looks more-or-less normal for a non-boom phase of the business cycle in which constraints on production capacity are not yet a thing.

The $2tn of spare cash on corporate balance sheets then looks not like a consequence of depressed investment, but a consequence of profits elevated by the collapse of the labor share that businesses are reluctant to pay out. And the $2.8tn of cash held by banks looks like a not unreasonable investment given that Treasury bonds pay little and can always go down in price, and Treasury bonds pay little because the labor share is low, savings are high, investment is normal, and inflation expectations are low.

I guess what I am saying is this: If business executives' animal spirits were unduly and irrationally depressed, it would be more credible to say that some political Potemkin village press events in Washington--Obama, Boehner, and McConnell proving that they can get things done, a minor trade deal, a small corporate tax deal, might summon the Confidence Fairy. But if business executives' current level of investment reflects a more-or-less normal assessment of fundamentals, such an argument becomes less credible. Then you would need serous policies that led to serious money flows to boost corporate investment.

And, of course, we are not going to get our public-infrastructure bank. Nor hs the Obama administration shown any inclination to, say, putting Glenn Hubbard in charge of unblocking the single housing-finance credit channel.

Indeed, realism peeks through in one passage in Tett's column:

It is also painfully easy to imagine another scenario: Republicans spend two years pushing partisan issues (such as the repeal of the Affordable Health Care act); and Mr Obama infuriates Republicans by using executive powers to push favoured causes, such as immigration reform. If that happens, partisan battles, and business despair, will remain intense....

Over at Equitable Growth: Our Current Macroeconomic Problems Here in the United States: Daily Focus

Over at Equitable Growth:

A puzzling piece from the very sharp Gillian Tett of the FT. My tentative conclusion was that she has fallen victim to the anthropologist's disease--getting so far into the heads and the mindsets of the culture she is observing that she loses track of the fact that there is a world outside. I have been holding this for a couple of days for two reasons:

But enough is enough... READ MOAR