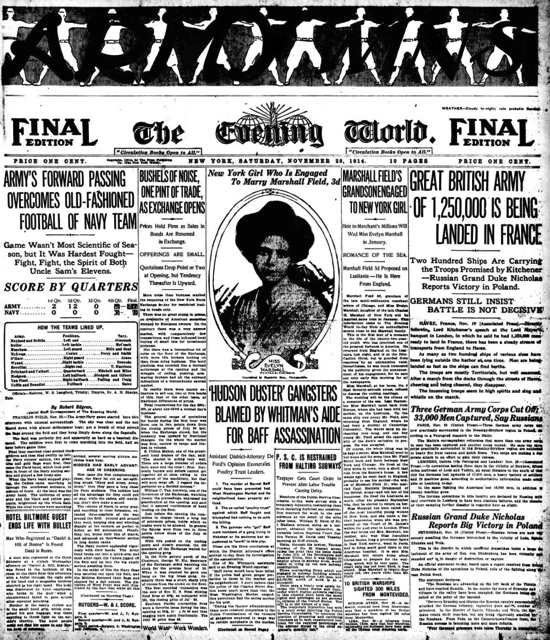 On July 31, 1914, the New York Stock Exchange closed its doors for the longest period in exchange history. It stayed closed until Nov. 28, 1914, when bonds began trading again. Stock trading re-opened Dec. 15, 1914, but shares were not allowed to trade below closing prices of July 30, 1914. By April 1, 1915, all trading was re-established without price limits. Most would dismiss the closing as a natural response to the beginning of World War I. But no war before or after (including the Civil War), or even the devastating attack on the World Trade Center less than one-half mile from the NYSE in 2001, has shuttered the exchange for more than 10 days in its 222-year history.

I will discuss why it was necessary to close the exchange and what lessons we can draw from the events of 100 years ago.

There is abundant historical significance to this story, and Henry George Stebbins Noble, president of the New York Stock Exchange from 1914 to 1919, chronicled it artfully in a 1915 book called The New York Stock Exchange in the Crisis of 1914. It is a story of disparate and even competing parties including bankers, brokers, other exchanges and clearing firms that steadfastly remained loyal to the New York Stock Exchange. Even the press cooperated in the closing by refraining from printing articles overly critical of the financial markets and by agreeing not to publish off-market prices in an attempt to calm and bolster the financial markets and forestall a run.

The fundamental reason for closing the Exchange was that America, when the war broke out, was in debt to Europe, and that Europe was sure to enforce the immediate payment of that debt in order to put herself in funds to prosecute this greatest of all wars…. There was to be an unexpected run on Uncle Sam’s Bank and the Stock Exchange was the paying teller’s window through which the money was to be drawn out, so the window was closed to gain time.

What Noble omitted is any reference to government interference, coercion or even influence on the closing or re-opening of the NYSE. In contrast to Noble’s version, a solid case can be built that Washington’s influence, particularly due to Treasury Secretary William G. McAdoo, was substantial. This was persuasively argued by New York University professor William Silber, in his book When Washington Shut Down Wall Street: The Great Financial Crisis of 1914 and the Origins of America's Monetary Supremacy.

Silber recently called the exchange closing “the longest circuit breaker in American financial history.” War aside, the beginning of the century to 1914 was the worst extended period for stock returns in the 20th century, besides the fateful years to come during the Depression. The Dow Jones Industrial Average (DJIA) was already faltering even before the rumblings that led to war. The DJIA was down almost 20% from Jan. 2, 1913, through July 30, 1914, though most of the drop occurred in the last week. One lesson: It is less disruptive to shut down the exchange in a bad market than in a good market, because of lowered expectations. Further, because of resulting heavy short interest, the stock market would have a built-in stabilizer, as short positions would later have to be covered. “It were well if ill-informed people who deprecate short selling would note this fact,” Noble commented.

Important themes emerged during this period including globalization, the ascendancy of New York as the capital market of the world, the role of the press, the weakness and durability of paper trading and the exchange itself and the long history of ignorance and resentment of the stock market.

For those of us who think of the “globalization” of markets as being a recent innovation, consider that upon the declaration of war on July 28, 1914, and in the days to follow, most major bourses closed in concert: Montreal, Toronto, Madrid, Vienna, Budapest, Brussels, Antwerp, Berlin, Rome, St. Petersburg, Paris and throughout South America. London, the world financial center, closed on July 31, 1914. Such was the global interconnectivity of interests and property 100 years ago. In the U.S., “Baltimore, Boston, Chicago, Cincinnati, Columbus, Detroit, Indianapolis, Philadelphia, Pittsburgh, St. Louis, San Francisco and Washington, all voted to close along with the NYSE.” If the NYSE had not closed, it would have been “the only market in which a world panic could vent itself.”

A key vulnerability in the U.S. was the threat that, as Silber wrote:

foreigners owned more than $4 billion U.S. railroad stocks and bonds at the outbreak of the Great War, with $3 billion of that in British hands. These securities were liquid assets and could be sold quickly on the NYSE. Under the gold standard, foreign investors could then use their cash proceeds to acquire the precious metal from the American banking system.

They could next ship it all back to London. The Bank of England had just experienced a run on gold and lost $52.5 million. It would be eager to refill its vaults. Further, “fear that the United States would abandon the gold standard pushed the value of the dollar to unprecedented depths on world markets. The magnitude of the problem forced America to defend itself.” Closing the NYSE was one of those defenses. Add to this the complication that Europe settled trades every two weeks while the U.S. settled trades daily. The backlog of unknown sells from Europe could have been overwhelming.

Why was gold important? Gold was the world currency up to World War I. Later, the pound sterling would replace gold. Still later, the dollar would assume its place. In an email interview, Dr. Silber wrote me, “McAdoo needed to keep gold in the country to insure a healthy opening of the Federal Reserve system.” The Federal Reserve grew out of the panic of 1907 with the charge to create reserve or elastic currency to attempt to avoid bank runs. The Federal Reserve is not entirely dependent on its precious metals store, as the U.S. Treasury was at the time. Therefore, its lending power became nearly instantly infinite. Its backing was now a nation, instead of only a nation’s treasure. Silber concluded in his book: “In January 1915 the New York capital market replaced London as money lender to the world.”

On July 31, 1914, the New York Stock Exchange closed its doors for the longest period in exchange history. It stayed closed until Nov. 28, 1914, when bonds began trading again. Stock trading re-opened Dec. 15, 1914, but shares were not allowed to trade below closing prices of July 30, 1914. By April 1, 1915, all trading was re-established without price limits. Most would dismiss the closing as a natural response to the beginning of World War I. But no war before or after (including the Civil War), or even the devastating attack on the World Trade Center less than one-half mile from the NYSE in 2001, has shuttered the exchange for more than 10 days in its 222-year history.