Grasping Reality by Brad DeLong
Archives Highlighted Previous Edit COVID Market for Man Slavery 20th C. Reading 'Chicago'
Afternoon Must-Read: Ed Luce: US Should Enjoy Sunshine While It Lasts
Over at Equitable Growth: Morning Must-Read: Marshall Steinbaum: The End of One Big Inflation and the Beginning of One Big Myth 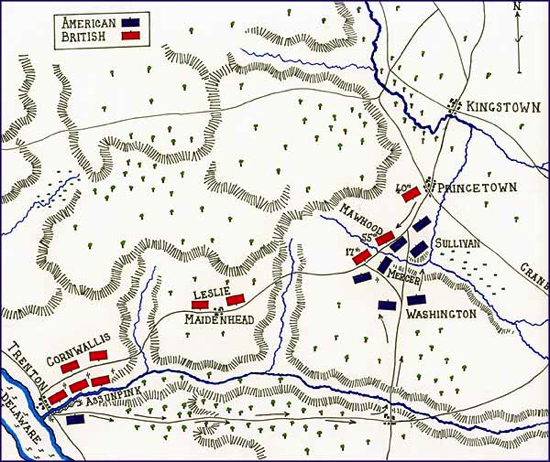 Sir: I have the honor to inform you, that since the date of my last from Trenton I have remov'd with the Army under my Command to this place. The difficulty of crossing the Delaware on Acct. of the Ice made our passage over it tedeous, and gave the Enemy an oppertunity of drawing in their Several Cantonments, and assembling their whole Force at Princeton. Their large Picquets, advanc'd towards Trenton; their great preparations, and some Intelligence I had received, added to their knowledge that the first of Janry. brought on a dissolution of the best part of our Army, gave me the strongest reasons to conclude that an attack upon us was meditating.

Our Situation was most critical and our strength [force] small; to remove immediately, was again destroying every dawn of hope which had begun to revive in the breasts of the Jersey Militia, and to bring those Troops which had first cross'd the Delaware, and were laying at Crosswixs under Genl. Cadwallader, and those under Genl. Mifflin at Bordenton (amounting in the whole to abt. 3600) to Trenton, was [to] bringing of them to an exposed place; one or the other however, was unavoidable; the latter was prefered, and these Troops [they] orderd to join us at Trenton which they did by a Night March on the first Instt.

On the Second, according to my expectation, the Enemy began to advance upon us, and after some skirmishing, the head of their Column reach'd Trenton about 4 O'Clock whilst their rear was as far back as Maidenhead; they attempted to pass Sanpinck [Assunpink] Creek (which runs through Trenton) at different places, but finding the Fords guarded, halted, and kindled their Fires. We were drawn up on the other Side of the Creek. In this Situation we remaind till dark canonading the Enemy, and receiving the Fire of their Field pieces, which did us but little damage.

Having by this time discoverd that the Enemy were greatly Superior in Numbers, and that their drift [design] was to surround us. I orderd all our Baggage to be removd silently to Burlington soon after dark, and at twelve O'Clock (after renewing our Fires, and leaving Guards at the Bridge in Trenton, and other passes on the same stream above March'd by a round about road to Princeton where I knew they could not have much force left, and might have Stores. One thing I was sure of, that it would avoid the appearance of a Retreat, which (was of Consequence) or to run the hazard of the whole Army's being cut of was unavoidable whilst we might, by a fortunate stroke withdraw Genl. Howe from Trenton, give some reputation to our Arms; happily we succeeded.

We found Princeton about Sunrise with only three Regiments of Infantry and three Troops of Light Horse in it, two of which were upon their March for Trenton; these three Regiments (especially the two first) made a gallant resistance and in killed, wounded and Prisoners must have lost near 500 Men upwards of one hundred of them were left dead in the Field, and with what I have with me, and what was taken in the pursuit, and carried across the Delaware, there are near 300 Prisoners, 14 of wch. are Officers, all British.

This piece of good fortune, is counter ballanced by the loss of the brave and worthy Genl. Mercer, [Cols Hazlet and Potter, Captn. Neal of the Artillery, Captn. Fleming, who commanded the 1st Virginia Regiment and four and five] and several other valuable Officers who [with 25 or 30 Privates] were slain in the Field and have since died of their Wounds. Our whole loss cannot be ascertained, as many who were in pursuit of the Enemy (who were chased three or four Miles) are not yet come in. Our Slain in the Field was about 30.

The rear of the Enemy's army laying at Maidenhead (not more than five or Six Miles from Princeton) were up with us before our pursuit was over, but as I had the precaution to destroy the Bridge over Stony Brooke (about half a Mile from the Field of Action) they were so long retarded there, as to give us time to move of in good order for this place. We took two Brass Field pieces from them, but for want of Horses could not bring them of. We also took some Blankets, Shoes, and a few other trifling Articles, Burnt the Hay and destroyed such other things as the Shortness of the time would admit of.

My original plan when I set out from Trenton was to have pushed on to Brunswick, but the harrassed State of our own Troops (many of them having had no rest for two Nights and a day) and the danger of loosing the advantage we had gaind by aiming at too much, Induced me, by the advice of my Officers, to relinquish the attempt but in my judgment Six or Eight hundred fresh Troops upon a forcd March would have destroyed all their Stores, and Magazines; taken (as we have since learnt) their Military Chest containing 70,000 Â£ and put an end to the War. The Enemy from the best Intelligence I have been able to get, were so much alarmed at the apprehension of this, that they March'd immediately to Brunswick without Halting (except at the Bridges, for I also took up those on Millstone on the different routs to Brunswick) and got there before day.

From the best Information I have received, Genl. Howe has left no Men either at Trenton or Princeton; the truth of this I am endeavouring to ascertain that I may regulate my movements accordingly. The Militia are taking Spirit, and, I am told, are coming in fast from this State; but I fear those from Philadelphia will scarce Submit to the hardships of a Winter Campaign much longer, especially as they very unluckily sent their Blankets with their Baggage to Burlington; I must do them the justice however to add, that they have undergone more fatigue and hardship than I expected Militia (especially Citizens) would have done at this Inclement Season. I am just moving to Morristown where I shall endeavour to put them under the best cover I can, hitherto we have lain without any, many of our poor Soldiers quite bearfoot and ill clad in other respects.

Sir: I have the honor to inform you, that since the date of my last from Trenton I have remov'd with the Army under my Command to this place. The difficulty of crossing the Delaware on Acct. of the Ice made our passage over it tedeous, and gave the Enemy an oppertunity of drawing in their Several Cantonments, and assembling their whole Force at Princeton. Their large Picquets, advanc'd towards Trenton; their great preparations, and some Intelligence I had received, added to their knowledge that the first of Janry. brought on a dissolution of the best part of our Army, gave me the strongest reasons to conclude that an attack upon us was meditating.