Over at Equitable Growth: Morning Must-Read: Marshall Steinbaum: The End of One Big Inflation and the Beginning of One Big Myth 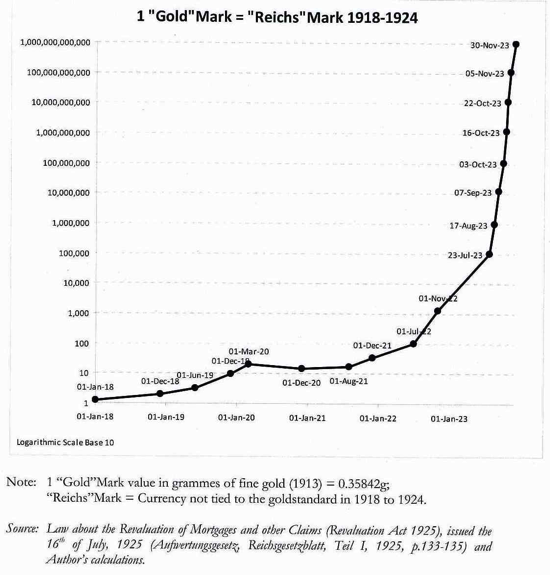 Over at Equitable Growth: One of the nice things about economics as an intellectual discipline is that you can effectively score intellectual-reputation points by taking on the work of giants a generation older than you--something that, IMHO, too-rarely happens in other disciplines. Here smart young whippersnapper Marshall Steinberg takes on the very sharp Tom Sargent's "The End of Four Big Inflations" account of Europe's post-WWI hyperinflations. READ MOAR

...I called it 'terrible history and questionable economics'... post-World-War-I monetary histories of Austria, Hungary, Poland, and Germany, which they all experienced hyperinflations, on the one hand, and Czechoslovakia, which did not, on the other... highly influential.... The titular Four Big Inflations were actually one big inflation... caused by the near-state-collapse embodied in the Treaties of Versailles, St. Germain-en-Laye, and Trianon... denuding the defeated... of... industrial capability... reparations.... Keynes' argument is that the reparations... exceeded... the maximum amount of government revenue that can be extracted from the productive economy.... A particularly important aspect of Keynes' argument is the tension between France and Poland's abject public finances, only made paper-solvent by ambitious reparations schedules.... [The] hyperinflations ended when the vague commitment to reparations imposed on them was removed by the League of Nations.... The German hyperinflation was a consequence of the postwar settlement, and most importantly, the huge reparations it faced....

Sargent tells a very different story. Each of his four hyperinflations ends when a central bank is reorganized to be politically independent of a national treasury. Thereafter, although the circulation of national currency continued to increase, inflation was kept under control because newly-independent central banks adhered to reserve requirements and only purchased securities on the open market, rather than accepting worthless government bonds from the Treasury. At the same time, national treasuries were disciplined by their lack of access to the money-printing presses to enforce fiscal austerity. That combination of institutional changes constitutes what Sargent calls a 'regime shift.'... The notion of a regime change might be helpful, but Sargent... mis-deploys it.... There was a regime shift... the US and Britain... prevailed over France and abandoned the most onerous aspects of the postwar settlement.

Before turning to the later intellectual history following Sargent, let's consider his 'control' case of Czechoslovakia... also created at the Treaty of [Saint-Germain-en-Laye], but... well-endowed with the most productive territory of the former Austria-Hungary... a perceived victim... never had to pay reparations....

So what's the harm in Sargent's paper?... As I see it, two things: 1. The conflation of inflation and hyperinflation. Sargent seeks economic lessons in the cost to output and employment from ending the sort of stagflation that characterized the 1970s in developed economies.... [But] hyperinflation happens because of state collapse or near-collapse. That's fundamentally different.... 2. More importantly, 'The Ends of Four Big Inflations' propagates the myth that monetary policy is easy to get right, once it's in the hands of a superman central banker whose force of discipline cows disorderly workers into accepting at least a restraint in wage increases.... Thanks to the Maastricht Treaty, [this] is enshrined in the mandate of the European Central Bank, to devastating effect....

When I TAed undergraduate macroeconomics at the University of Chicago, there was a problem set with the following scenario, presented as a factual historical statement: in order to win the 1980 general election, the government of Brazil decided to fool voters into thinking their wages had gone up by printing money at a greater rate. What is the time path of nominal and real wages? Then, in 1985, a new government decided to tame inflation by appointing a central banker from the University of Chicago. What happens to inflation then?

In 1980 (and until the late 80s-early 90s), Brazil was governed by a US-backed military junta. Needless to say, there was no general election in 1980.... If it suffered from high inflation, that wasn't because its democratically-elected regime was too spineless to give the voters a dose of UChicago patent medicine. Nonetheless, this idea of the craven politicians and the savior economists/central bankers has been a persistent but useful myth. The actual treatment can start with a dose of historical reality.

I think Marshall's (1), (2), and (4) are completely correct. But I think that there is more to be said for Tom on (3) than Marshall allows. Yes, you cannot stop hyperinflation until you have changed the fiscal regime so that it is possible to collect enough taxes to amortize the government's debt at the current price level. But there is nothing that says that the hyperinflation has to stop then. You also need--after the fiscal régime change--a monetary régime change that both (a) steps up the pace of printing money, but (b) removes the ability of the government to finance its ongoing expenditures via seigniorage, and (c) creates a central bank credibly committed to price stability. Hjalmar Horace Greeley Schacht's and the other stabilizations could not have been accomplished earlier, before the abandonment of largest-scale reparations demands. But they did require a monetary régime change to put into effect after they were possible.

IIRC, Stanley Fischer essentially made Marshall's criticism of Tom's paper when it was presented, and Tom wrote a follow-up--"Stopping Moderate Inflation: the Methods of Poincare and Thatcher" contrasting the French cold-turkey régime change stabilization of 1926-1927 with Thatcherite British gradualist monetary growth rules in the 1980s, to the discredit of the latter. IIRC, it was a little too optimistic on how painlessly the French stabilization was accomplished...

Over at Equitable Growth: Morning Must-Read: Marshall Steinbaum: The End of One Big Inflation and the Beginning of One Big Myth

Over at Equitable Growth: One of the nice things about economics as an intellectual discipline is that you can effectively score intellectual-reputation points by taking on the work of giants a generation older than you--something that, IMHO, too-rarely happens in other disciplines. Here smart young whippersnapper Marshall Steinberg takes on the very sharp Tom Sargent's "The End of Four Big Inflations" account of Europe's post-WWI hyperinflations. READ MOAR